I’m Dan (Chick) Roberts, 45, born in Canada but living in the USA for the second half of my life. I am a computer programmer who like motorcycles, poker, virtual reality, and alternative subcultures.

I am married to Reagan (Nancy) Roberts and we have two dogs and two cats. We currently live in Denver, Colorado.

How did you get started in light painting?

I used to shoot action sports photography, then alternative models. I got bored and hung up the camera for five years. I don’t remember what I saw that got me started, but eventually I found my way to light painting. I remember the artists I first saw were Tig Tab and Patrick Rochon. I immediately played around with making my own tools, including stencils, and I tried to leverage my love of model photography. At the time there didn’t seem to be as much light painting with close-up shots of models, so Patrick’s work really spoke to me. This would be the direction I took most of my work, with close-up models.

What do you like most about lightpainting? And least?

I used the phrase ‘performance photography’ before I learned about LAPP. I like that you have to earn each shot, and that no matter how you try, you will not be able to take the same shot twice. I love the way people get excited to try or to make new tools, and I love the looks on their faces when I wave lights around in the dark, and they see themselves light painted for the first time. That first time experiencing light painting is like magic.

How do you tend to develop your projects?

My projects… that means a lot. I’ve made a lot of technology projects for light painting, two of which you ask about below. For the tech projects I get an idea in my head and I can just sort of visualize how it all comes together. Being a computer programmer has helped me create a lot of them, like LightMonster, LivePictureShow.com (for event light painters and photographers), and PieceOut.com.

For individual shots, I don’t tend to plan for most of them. I’m comfortable with my tools and often just freestyle in the moment. When outer space is involved it takes a little more planning.

My favorite shots are complex and technical. I love two or three minute shots where the tools change in the middle of a shot. A stencil is up for part of it, but not all of it. Maybe there’s a tripod or lens swap. Some of the shot uses a prism but not all of it. I feel like there are a couple dozen light painters in the world that end up being my main audience, as they are into similar shots of their own.

You are a very active member of the light painting community. As well as writing articles and tutorials for Lightpaintingblog, you were also involved in the creation of the website LightPainters.com alongside Gunnar Heilmann.

Can you tell us a little bit, for those who are not already familiar with it, about what sorts of content you can find there?

There were a couple inspirations for this project, for me. Gunnar had his own inspirations and we happened to talk at the right time to decide to team up on it. For me, I thought it ridiculous to see the same shot on ten different groups on Facebook. On Instagram you would just post it one time and add all the tags you wanted to have it show up on various places. I also shot some fine art content that wouldn’t pass the Facebook standards for nudity. I had offered at one point to help out with the LPWA site, but Sergey was working with someone else on that project and I wasn’t able to get involved.

Gunnar wanted to build a more modern community site for light painters, and when I told him I already had experience building online community sites we decided to give it a go. I built the site, and mobile app, and he is the main social media curator and evangelist, running most of the day-to-day stuff.

As for the site itself, there is a search for light painters, portfolio pages, a map to see where people are in the world, links to resources, and an image feed that you can filter based on tools used, subject matter, or artist country. We do have a mobile app for Android, and we’ll be releasing new versions for iOS and Android, hopefully later this year.

You also developed www.thelightmonster.com – a piece of software which allows real time video lightpainting. How did you end up getting involved in that?

As a programmer I just dabble. I started an early version of this project about five years ago. There are a few other similar projects out there that probably got started around the same time, and perhaps even a little before. I got involved in my normal way, thinking about it, wondering if I could do it, and then doing it.

I built a lot of features for it, including three ways to control what happens, and it’s a big hit at parties. After a while I decided to release it to the world for free because I wanted to see all the time I put into be useful to others. I might make a newer version and possibly commercialize that later, but I don’t have time to do that right now.

Which photographers, light painters and / or other artists have influenced you?

In the early days, Patrick Rochon, as mentioned above. On an on-going basis, I have to name Tim Gamble and Mart Barras for their technical shots, and then more recently adding Tom Hill for the same. I love the stencil work and creativity from Kim Von Coals. Although I haven’t really done much with calligraphy, that’s one of the next things I keep planning to get into and I take inspiration from Mass, Cisco, and Stabeu. On the tool-creation front, Johnny Griffin and I have probably traded the most ideas.

Which 3 tools do you always take with you?

Especially for group shoots I will have my prisms and my kaleidoscope tools, and maybe some color gels.  I love the idea of live-remixing shots when shooting in a group, so we can end up with different results.

I have an awesome set of colored flashlights that Sven Gerard gifted me as a wedding present, in addition to my two MT18s.

I love black fiber optic brushes, but in my early days I got a BitWhip from AntsOnAMelon.com and that has been one of my main tools that I keep coming back to.

Have you experienced any memorable / special moments whilst doing light painting?

Other than getting engaged via light painting in Berlin? 🙂 The times with friends are what make it all worthwhile to me. Rome, Berlin, Belgium, Mt. St Helens, the meteor jams in Colorado and Arizona, the friends I have in Colorado and all over the world. To me, the art is fun and I love it, but the most valuable reward from me is spending time with people.

Walking up to the bridge in Rome and actually meeting a huge group of light painters is something I’ll never forget. The Praise Pala shot in the caves in Belgium as well. And then in Berlin, getting some of the top light painters in the world to help me make an image to propose to my wife. Yeah, those are three of my top moments.

Recently you were involved in an international collaboration between the USA and Spain, together with Frodo from Children of Darklight. This was a fascinating project and we’d love to know a bit more about it. How did this idea come to light and how did you achieve it?

Thanks! It seems like light painters loved it and the rest of the photography world thought it was a dumb gimmick. For me, I shot alone in Colorado for years, not close to any other light painters. Denver is as far from another major city with light painters as Berlin is from Rome. Once I met some other light painters, the idea of remote collaboration was appealing, but it would take some technology effort and I was lazy.

Frodo always likes to try new things and I mentioned my idea on one of the European trips. He was interested but we never moved the idae forward. When Covid shut down the world it was time to try!

Basically it involved taking a live video feed over the internet and projecting it onto a screen behind a model that I was light painting. The light that Frodo drew in Madrid traveled over the internet to my video feed, and he put light into my picture, almost as if he was here with me! We created several shots together, including one with me, him, and Reagan, as if we were all in the same place. There were some challenges, and while it’s not the same as doing it in person, it was really neat to see that idea come to fruition!

What has been your biggest photographic challenge or the photo which was hardest for you to achieve?

I have hosted four meteor shower light painting meetups. The first one was just three of us, and we were out in the cold trying to capture meteors in light painting shots. The settings you need for astrophotography are very different from most light painting shots, and I didn’t have a lens with manual aperture, so I used a 10-stop ND filter. I’d expose the sky for 30 seconds, then light paint, adding or removing the ND filter. We had no way of making the meteor trails happen, so that’s just luck. At the end of the night I wrote the word ‘meteor’ nineteen times and went home thinking I wasn’t able to do it while catching a meteor, but it turns out I did!

I tried a harder shot two years ago, where I wanted to light paint during the solar eclipse. I had two minutes and 19 seconds to do my shot, which was going to be a tripod swap shot with Reagan and the sun, changing zoom length and aperture in the process. I couldn’t find any information on how much darker it would be during eclipse, so I was making that up on the fly too. With 139 seconds total I didn’t have much time to make it all happen. When the eclipse started I tried my shot but missed a step. I had time to make another attempt but I decided that I’d rather watch the rest of the eclipse than maybe mess up again and miss the whole thing. Maybe next time!

What advice would you give to new light painters?

Try things! I feel like the more experienced I got, the less I tried new things. Learn from people who came before you (and credit them when you can, this helps with goodwill!) and then try to put your own twist on a technique. And mostly, just shoot! You’ll improve so much just by doing things and seeing what they turn into.

There are also so many tutorials and resources out there for you to learn from, check those out. I want to list all of my friends who do videos but I’m sure I’ll forget someone, but Russell Klimas, Gunnar Heilmann, Lumenman, Denis Smith, Jason Page, and others have great videos that teach the way of the light! 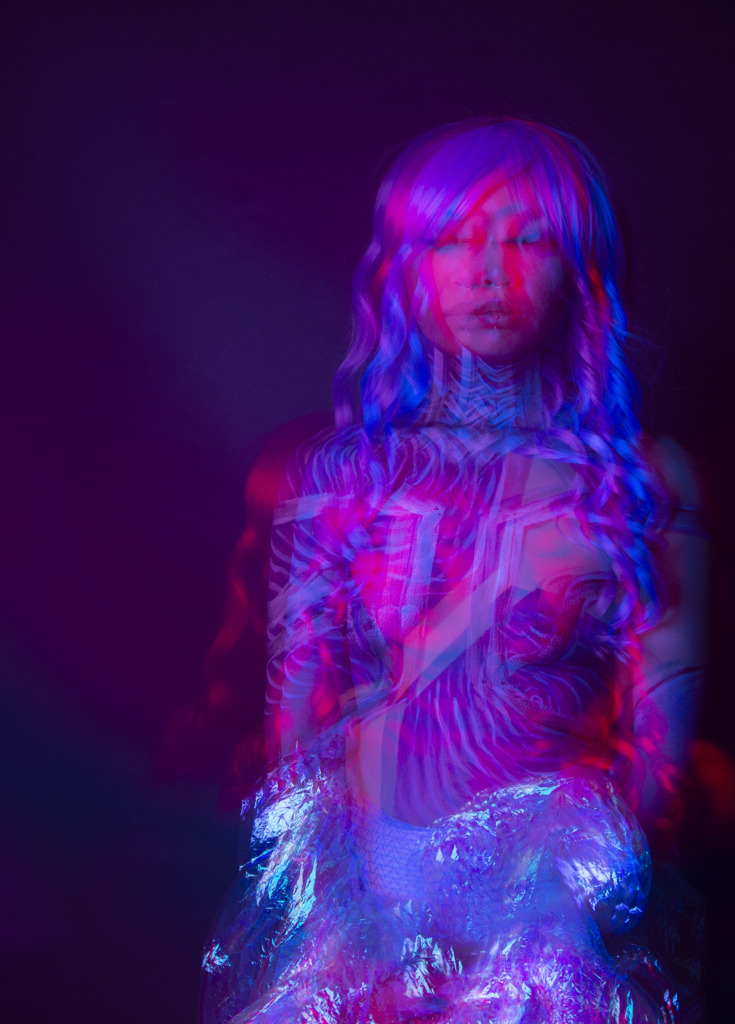