We did a brief interview with him so you can get to know a bit more about him and his work.

Welcome to the family Sven! 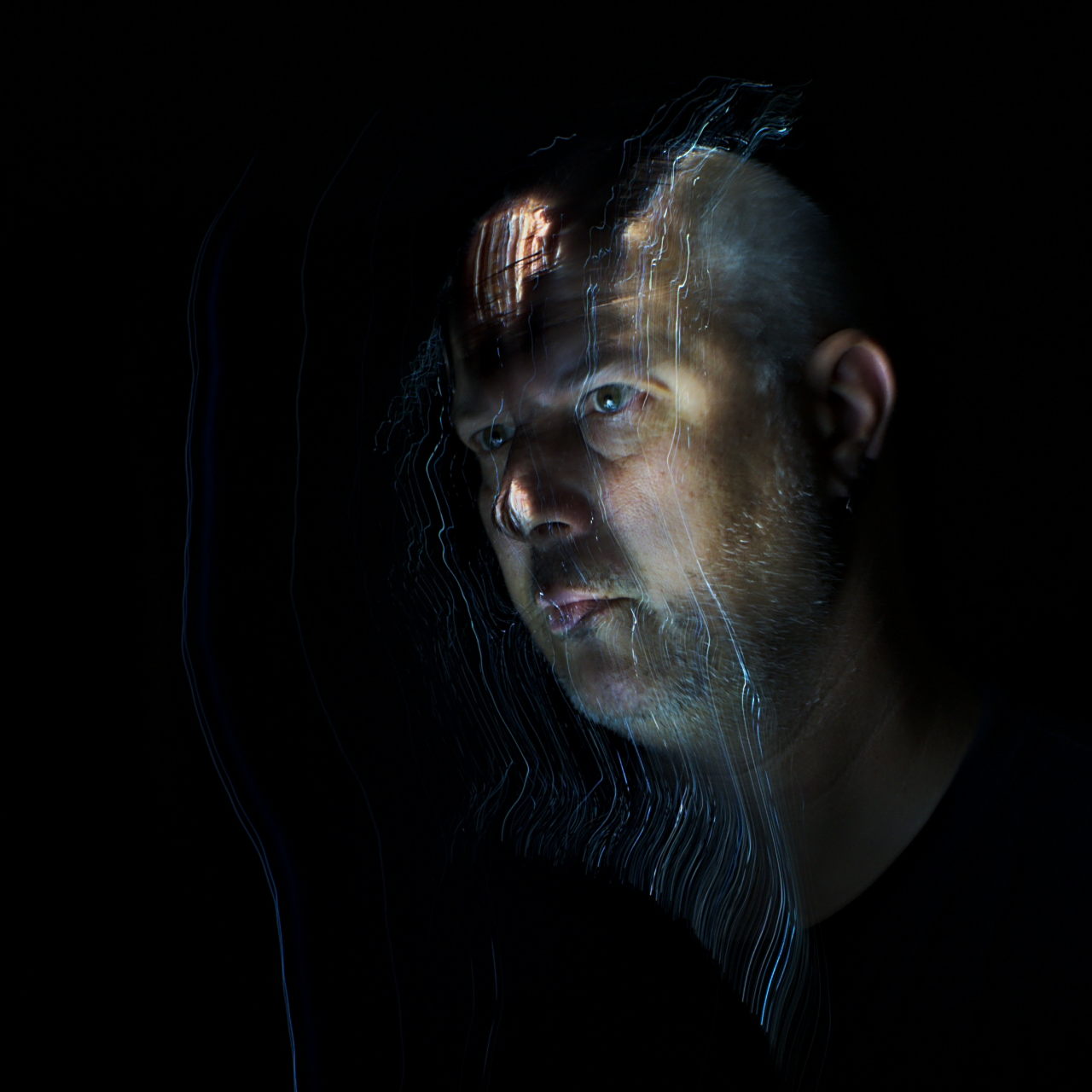 My name is Sven Gerard, born 1969 in Berlin, Germany. I have been passionate about photography for over 40 years and since 2012 I have mainly been working in light painting and long exposure. I also like to hang out with my camera in abandoned places.

A few years ago I also infected my wife Marla and our son Erik with the Light Painting Virus, so we are a kind of family business.

How did you get started in Light Painting?

Back in 2012 I discovered some Light Paintings on the Internet by chance. Most inexperienced viewers would have immediately dismissed these (almost) perfect pictures as having been created in Photoshop however it was somehow immediately obvious to me that the artists had actually made these artworks in a single photographic exposure. Working with a moving light in front of the camera – I was immediately thrilled and had to try it myself!

I started off by searching the internet for instructions and tutorials. I found many more Light Paintings but hardly any of the artists were willing to reveal their tricks in public. Exact step-by-step instructions were virtually non-existent.

So, I looked in the basement and in the apartment for everything that lit up and bought some chains of lights, sparklers and LED toys in the 1€ shop and took it all, along with my camera, to a nearby park at night.. The first attempts were no masterpieces but I didn’t want to give up.

I spent many nights working in the darkness to improve my skills and find or build better tools. And even now, this process is not over – an important aspect for me is always trying out new things.

What do you like most about Light Painting?  And least?

For me various things about Light Painting are important. Besides understanding physical contexts, creating works of art, building new tools and developing new techniques, there is also that special feeling of happiness when the craziest idea is actually visible on the camera screen exactly as planned.

Even though this may sound a bit naive, I wish all Light Painters would see each other as a community with the goal of having fun together, supporting each other and creating great artworks.

What style of Light Painting are you known for?  What sort of shots do you tend to create?

Because I regularly try out new tools and techniques, there is not really a single clear style which defines my work. For me personally, I would find itar too boring to do the same thing all the time.

On the other hand, many of my pictures are created in abandoned places and I do like to try to breathe some life back into these places with my lighting. Perhaps that could be considered as something like a style.

How do you tend to develop your projects?

It varies a lot. Sometimes I work spontaneously and alone in my basement, mainly to test new tools. Sometimes I do “simple” portraits with fibre optics and other tools of people I like.

The bigger projects in special, mostly abandoned, places I plan very carefully. After all, it would be extremely annoying if we drove 500 kilometres by car and we couldn’t achieve what we had planned because we forgot something!

For these sorts of shots, we’ll make sure we have access to the location. we look at the location in daylight and we plan out the pictures we want to achieve. Most of the time I have several ideas for the location.

Often, however, the best ideas and pictures are created while working on location. Once you see the first picture on screen it often kicks off a whole new set of ideas straight away.  I could quite happily spend days at some of the locations I’ve been to!

What has been your biggest photographic challenge or the photo which was hardest for you to acheive?

That’s a tough question. I can think of some pictures that were “not so easy” to realize. As an example I would like to use this picture.

I’ve probably spent about 100 hours working on this picture in total. The difficulty here was to capture a sharp close up of my eye and then be able to to rotate the orb in the right size exactly in the middle of the eye.

First I mounted a 100mm macro lens with a +2 close-up lens on my Nikon D750 to photograph my eye.  I connected the camera to the tablet via Wifi to allow me to be able to positing my head correctly in front of the camera. I rested my head against the corner of the room to allow me to keep the position securely without moving.

I then started the exposure and then briefly lit my eye with a warm white torch. I can tell you that 1200 lumens from a meter away is not very pleasant!

Next, I swapped to the 14 mm Sigma lens and mounted the camera on a second tripod, which had been previously set up ready for the orb. At the position marked on the ground, I then spun the orb.

For the last step I changed the lens one more time, this time to a Meyer Optik Görlitz 35 mm to paint the star in the middle.

If you ignore all the individual shots used to get the image set up, this was the 23rd attempt to get it right!.

Which 3 tools do you always take with you? What is your favourite Light Painting tool and why?

I wouldn’t say I have a favourite Light Painting tool, as I regularly use a lot of different tools, but there are some tools I always take with me:

– A set of homemade torches with coloured Led’s (red, blue, green, orange, light blue and pink) The torches are small, light and equipped with 10 Watt Led’s, so they are bright enough for most tasks.

– A selection of tubes, rods, blades and fibre optics

– At least one large, bright torch like the Led Lenser X21R.2 including matching color gels

Which photographers, Light Painters and / or other artists have influenced you?

I can’t list all the Light Painters and other artists who have inspired me with their pictures. I would however like to name a few people along with dozens of other talented light painters :

– Tim Gamble – he always has new, crazy ideas. He often puts his pictures into practice with enormous effort. The results are impressive and emotional.

– Pala Teth – his images immediately catch the viewer’s gaze. Impressive locations, perfect light in perfectly coordinated colours. The viewer immediately feels the fun Pala and his companions had at work.

Can you tell us any funny stories which have happened whilst you have been Light Painting?

There some funny stories i could tell… but none that stands out and would be worth sharing.

If you could only keep one photograph, which would it be and why?

I love the sea, i love the island of Hiddensee and i love the beautiful woman in the picture. It’s not about the perfect, elaborate light painting. My feeling when looking at the picture after a few years is still the same as the day we took it by the sea. 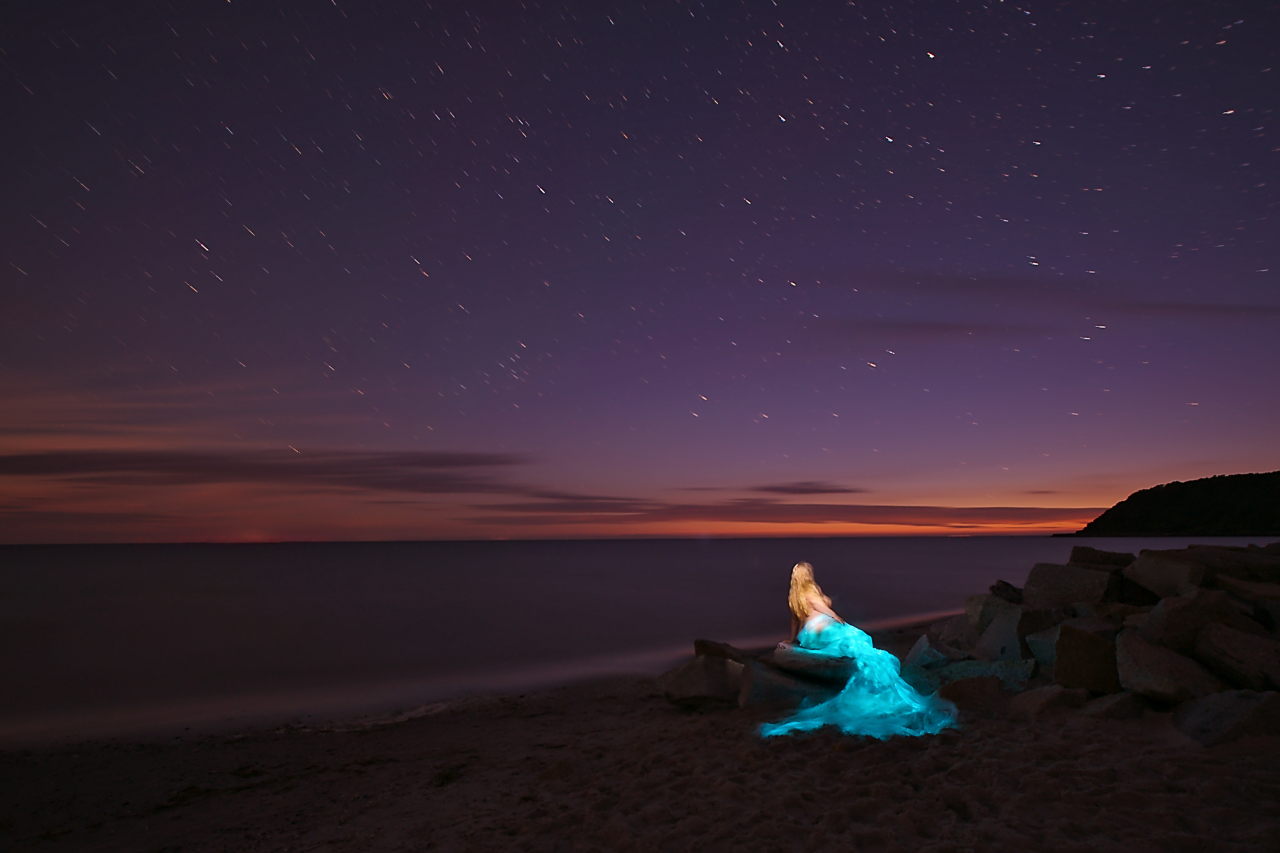 What advice would you give to new Light Painters?

Go out and wave lights! You don’t get any better if you look at tutorials or hundreds of other Light Paintings – you only get better if you practice. If I were to watch Kung Fu movies 100 times I still would not be a Kung Fu fighter.

Equally, do not constantly buy new flashlights, tools, cameras, lenses… as long as you haven’t fully used the possibilities of your current equipment. The less tools you use, the better you will be able to handle them. Then again, I am not a good role model. 😉

You are part of the organisation for Light Up Berlin.Tell us more about that

How did the idea for this international Light Painting event come to you?

Together with some other Light Painters we had the idea to invite some Light Painting friends from around the world to a meeting in Berlin. But this time round we didn’t want to exclude the public from this meeting, even if it would involve a lot of effort. So, over a year ago we started to think about how we could best realize such a meeting.

We started off by inviting the artists. Almost everyone was immediately enthusiastic and promised their participation and support – I love the Light Painting community! In hardly any other group would such a thing be conceivable. After all, no one gets a fee for it. It is all about fun and passion for light painting.

What will the event consist of?

First of all it is a meeting of international Light Painters. I am very happy to see all of these crazy people again. I’m also very excited to be able to get to know a number of light painters that I have not been able to meet in person yet.

There will also be an exhibition, a light painting photo booth, workshops, lectures, live performances, sale of Light Painting tools and much more.

What activities will make up the program?

– Any Light Painter can submit up to 3 images for the gallery: www.lightupberlin.de/exhibition These are presented on large monitors and projectors.

– There will be at least 12 different Light Painting workshops. Participation in the workshops is included in the admission fee. Registration for the workshops is possible in advance: www.lightupberlin.de/workshops

– Visitors have the opportunity to test Light Painting tools and talk to the artists.

– Visitors can watch the Light Painting artists at work during several live performances.

Which artists have been invited?

I’m also hoping that Pala Teth and Tim Gamble will be able to attend.

How many attendees are you hoping will attend Light Up Berlin and from which countries?

For safety reasons the number of participants is limited to 450. I hope that between 300 and 450 participants will attend the event. So far we have guests from Germany, Netherlands, Switzerland, France, Italy, UK, Poland, Czech Republic, Portugal, Spain and some more.

More information about the event can be found here:  www.lightupberlin.de

You can see more of Sven’s work and follow him on social media here: